Professional Gamblers: What Does a Beggar & Pro Gambler Have in Common? 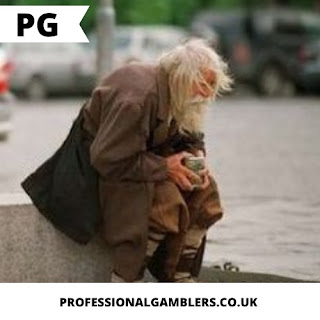 What does a beggar on the street and professional gambler have in common?

It sounds like a joke uttered by Les Dawson back in the day. However, the punchline isn't very amusing and very few of you are likely to even understand.

This matter can be detailed in three little word.

I'm sure you must be thinking the only thing a beggar and professional gambler have in common is that they may be down on their luck.

A distinct lack of coinage.

We've all had our days, hey.

However, you couldn't be further from the truth.

In fact, without realising it, you have fallen into the same trap as 99.9% of the population. You've uttered those three little words. It's sad but true.

It's like a magic trick gone wrong - where you just tarred and feathered this innocent man.

You may be wondering what on Earth I am talking about.

However, take a look at the photo above and consider what you see. I would love to hear your thoughts. I won't lambaste you for your response. In as far as your/our perceptions go we are simply innocents.

Except we are innocently cutting.

It's true, the man pictured above, could be viewed as a tramp. But he is also the most caring, wonderful, humane and generous person you are ever likely to meet.

It's only when you understand someone's story that you see the truth. And how true are those words for so many aspects of life whether you are a professional gambler or, for lack of a  better word, professional tramp.

What interests me more about this story isn't so much the professional gambler.

A few readers who understand psychology will have an idea of the three little words I have in mind (I love you!). It's called Fundamental Attribution Error.

See ''the tramp'' in question has been observed being given money. What do you think he's using the money for: Drink? Drugs? Food?

Let's give the tramp a name and learn a little about his story.

Dobri Dobrev lives in Bulgaria and he is 98 years old.

The interesting part of the story - in fact the crux of perception or attribution - is that he isn't collecting the money for himself.

In fact, he has donated every penny (over 40,000 euros) towards the restoration of decaying Bulgarian monasteries and churches and the utility bills of orphanages while living entirely off his pension of 80 euros a month.

Dobri never begs for money, people just put money in his little wooden box and he shows them respect.

So often in life it is all too easy to judge.

If you want to know the answer to a question, take the time to understand the person because their story might surprise you.